1970s Apartment Update for a Professional Couple and Their Bulldog

This young professional couple and their adorable bulldog were lucky enough to snag an apartment in a great location (Sydney’s stunning Northern Beaches). The only problem was, after being built in the 1970s, the apartment had barely been updated, leaving it feeling tired and out-dated. The couple came to Studio Benicio with a simple brief – create a more functional apartment. The architect responded with a bold and colourful design which connects the kitchen to the living and dining areas and creates a better indoor-outdoor connection so the clients can make the most of Syndey’s warm climate… 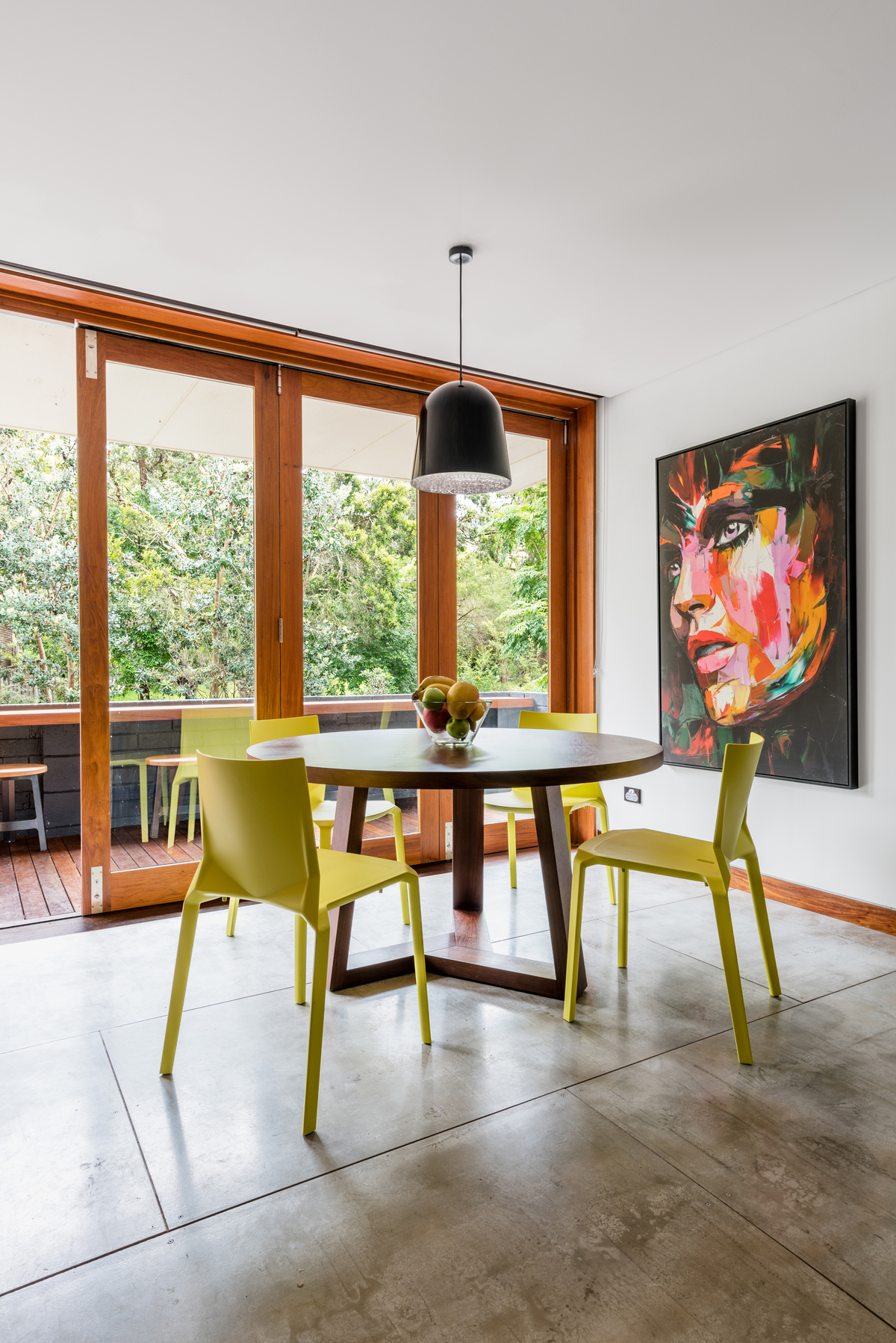 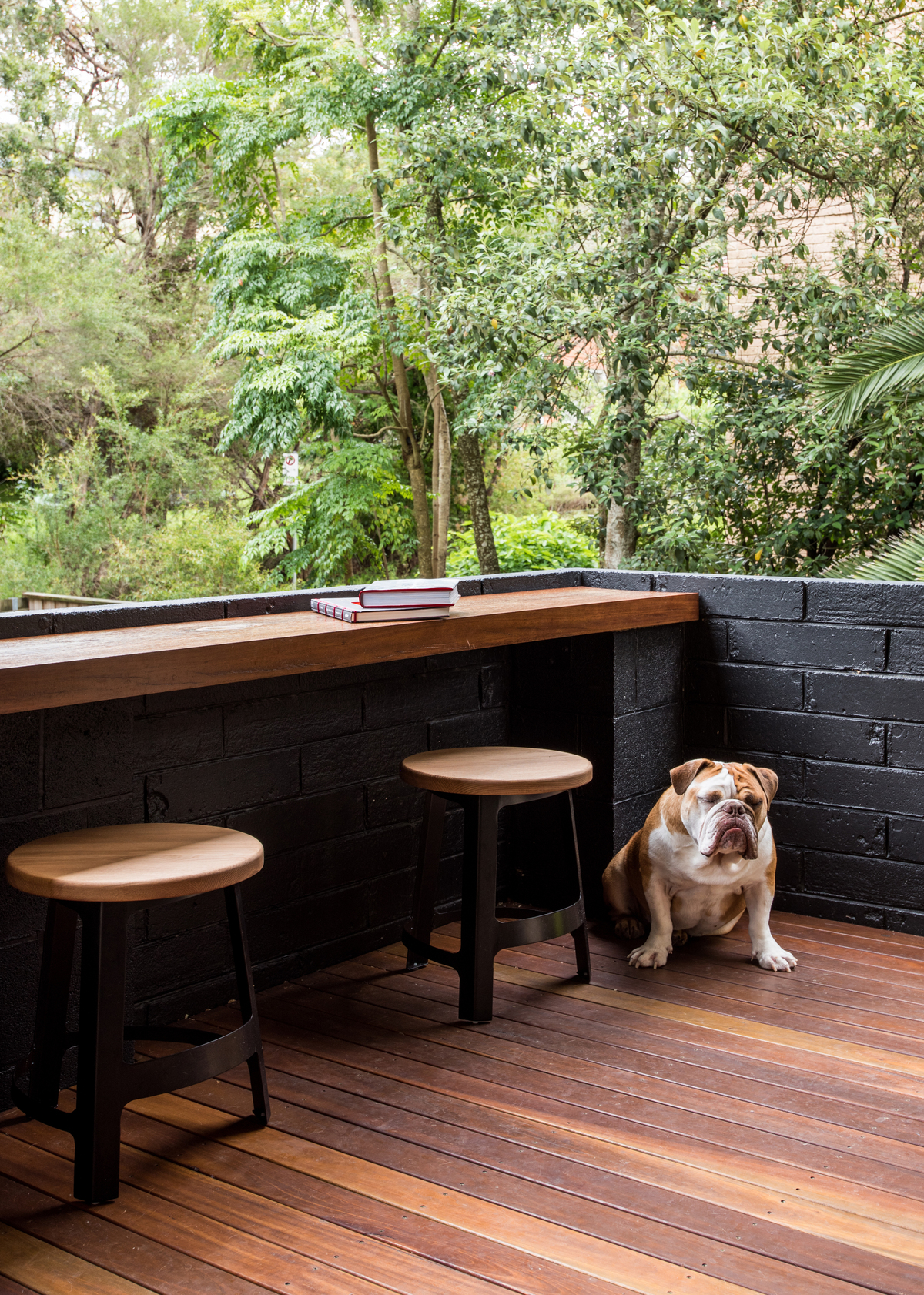 The design focused on creating a modern, open-plan space to give the apartment a better sense of spaciousness and to connect the living spaces with the deck to enjoy outdoor living. The architect removed a structural wall between the kitchen and living area to open up the space. They also installed a bifold door to disolve the wall between the living area and the deck. 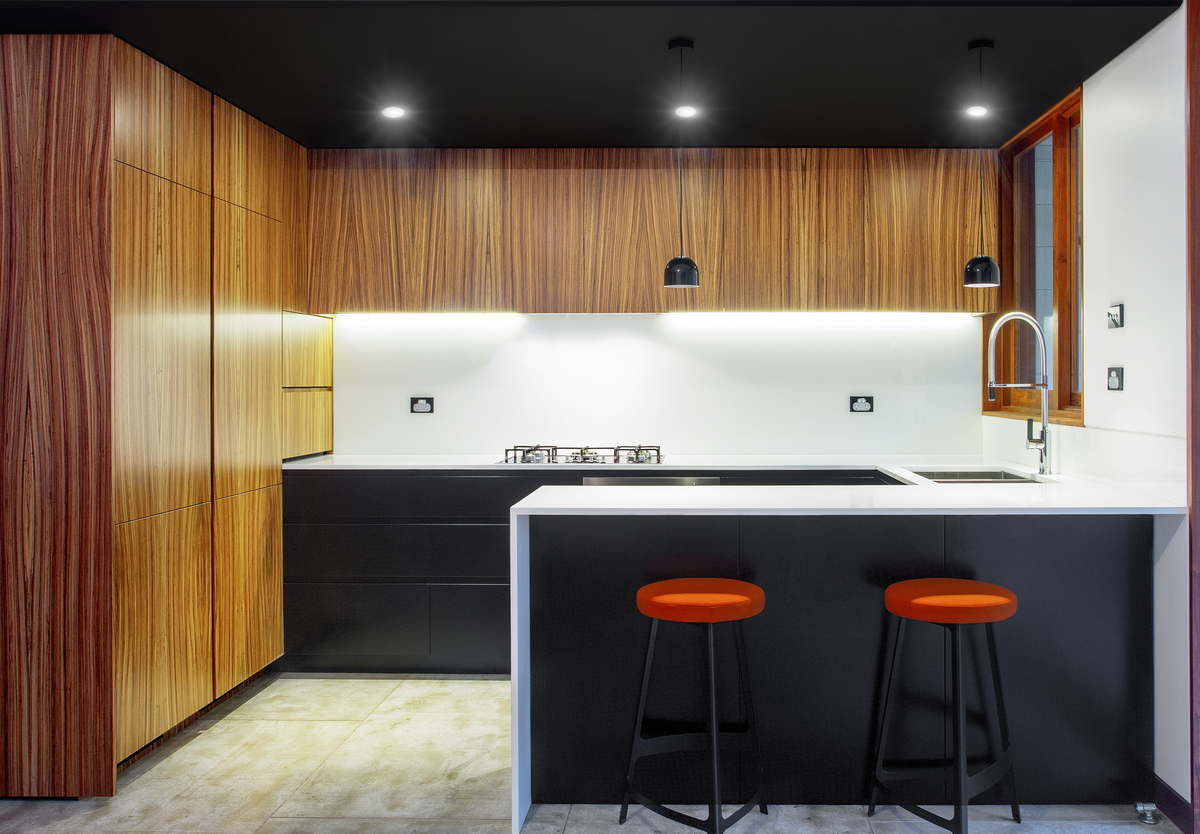 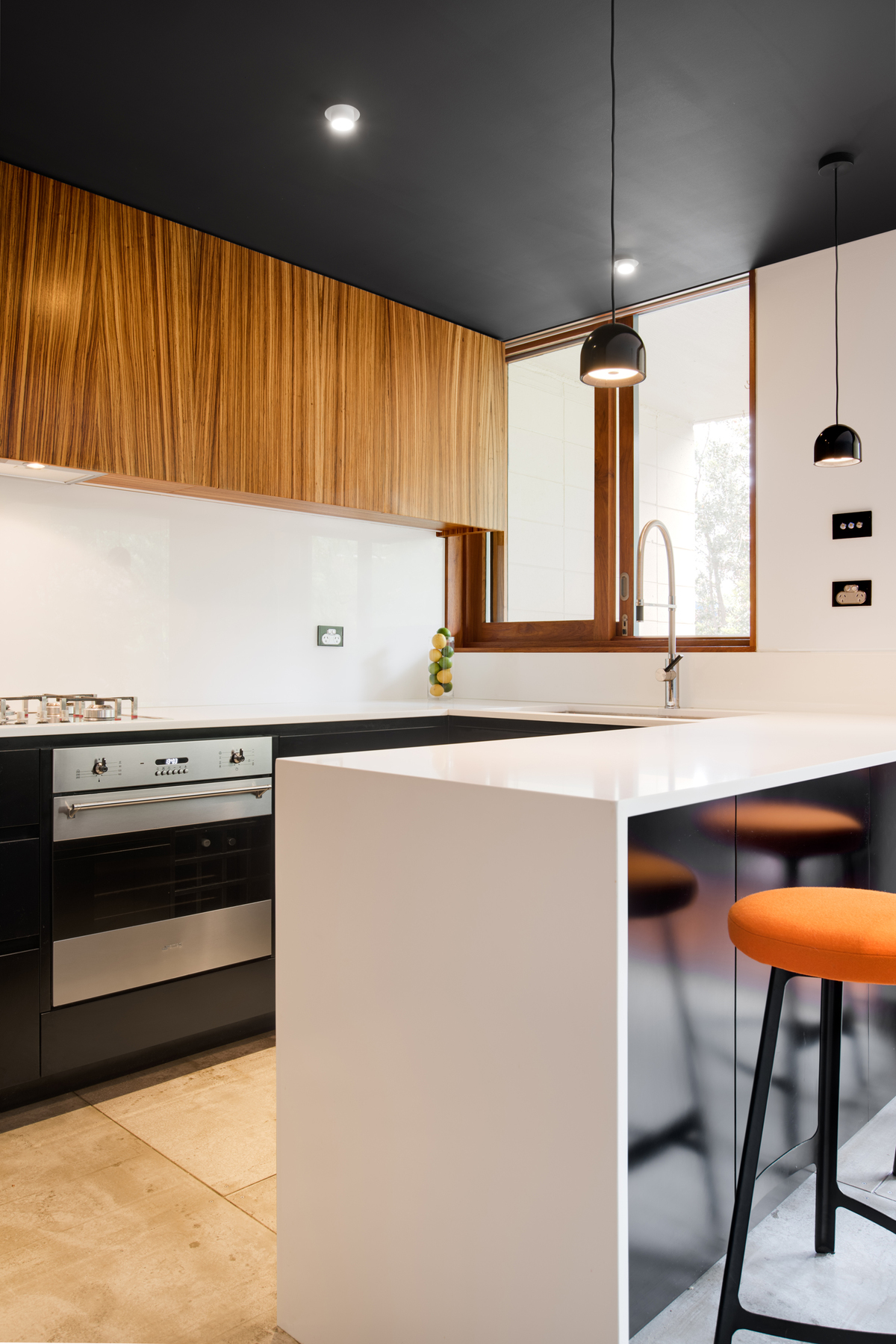 A dramatic black dropped ceiling gives the kitchen its own sense of space inspite being in the open-plan area. “We find that most people underestimate the impact of a dropped ceiling and instead use a bulkhead to cover up whatever it may be coming into the space from above. With this project we dropped the entire ceiling over the kitchen due to the beam that was needed to replace the structural wall. To emphasize the dropped ceiling, we painted it black & it sets the tone for the rest of the apartment,” explains Ian Bennett of Studio Benicio. 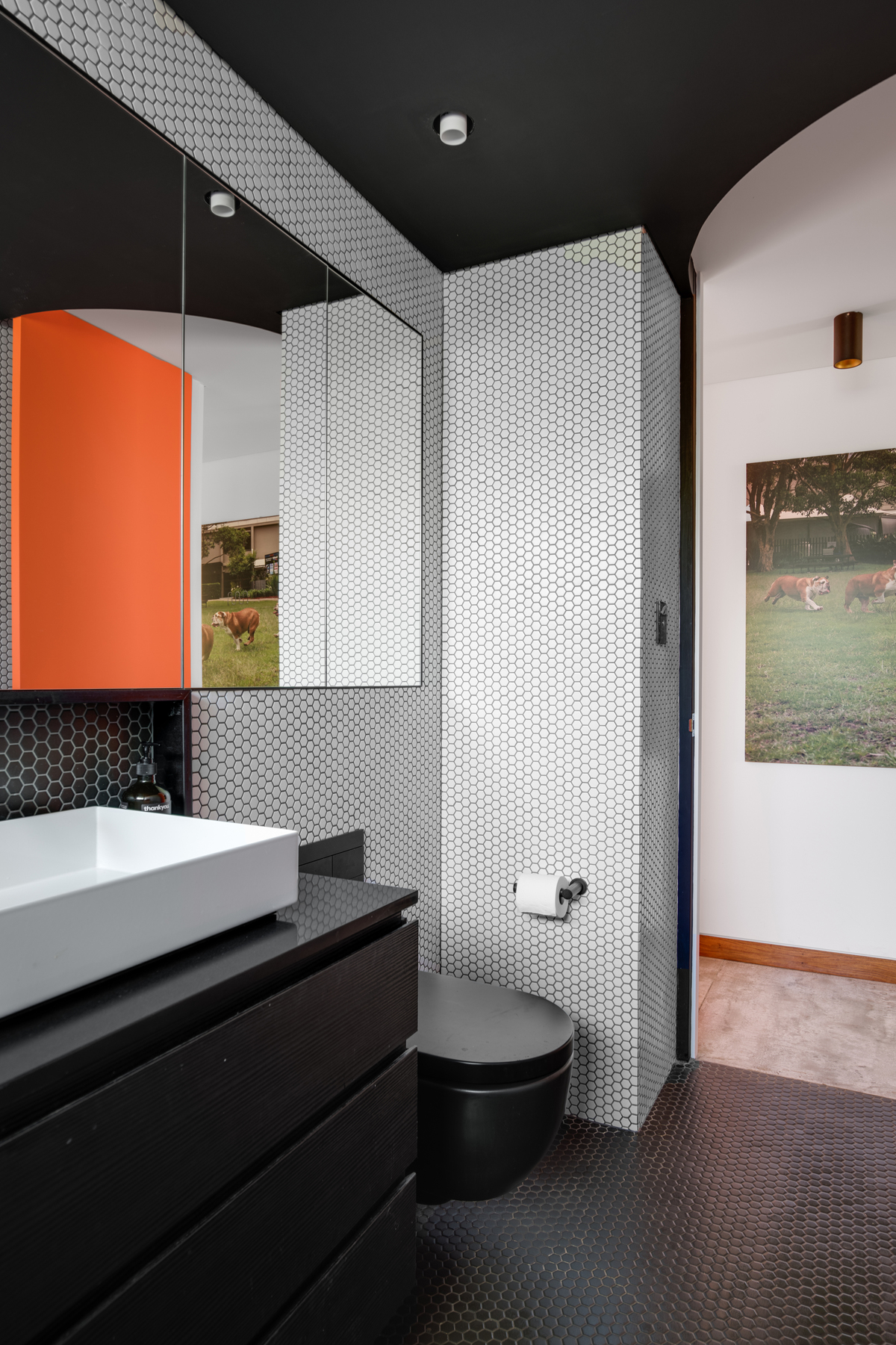 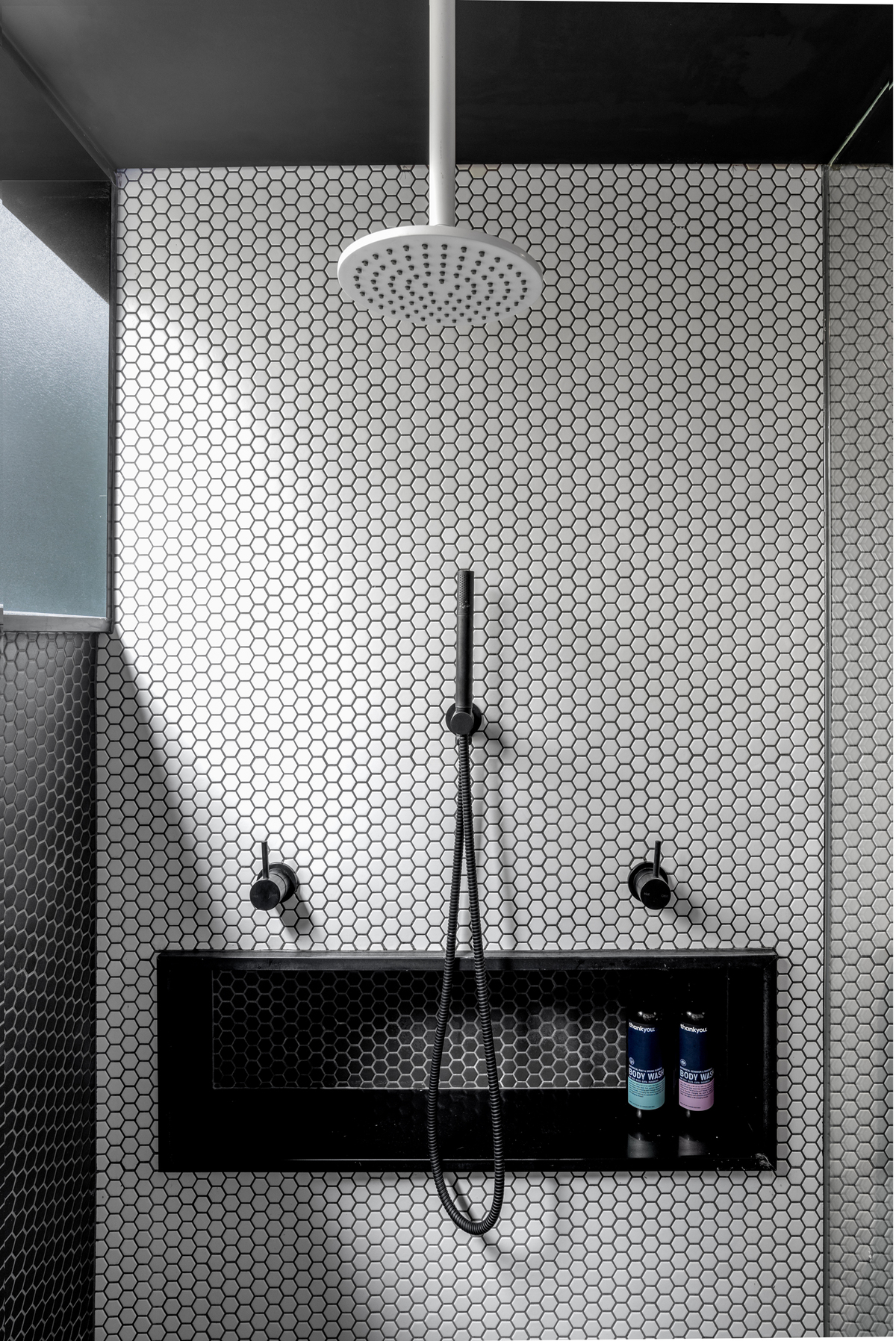 “We also continued [the dropped ceilings] into the bathroom where we had plumbing from the apartment above coming into our space, we dropped the entire ceiling and even went to the extent of providing a curved upturn of this ceiling for the bathroom door to swing past.” 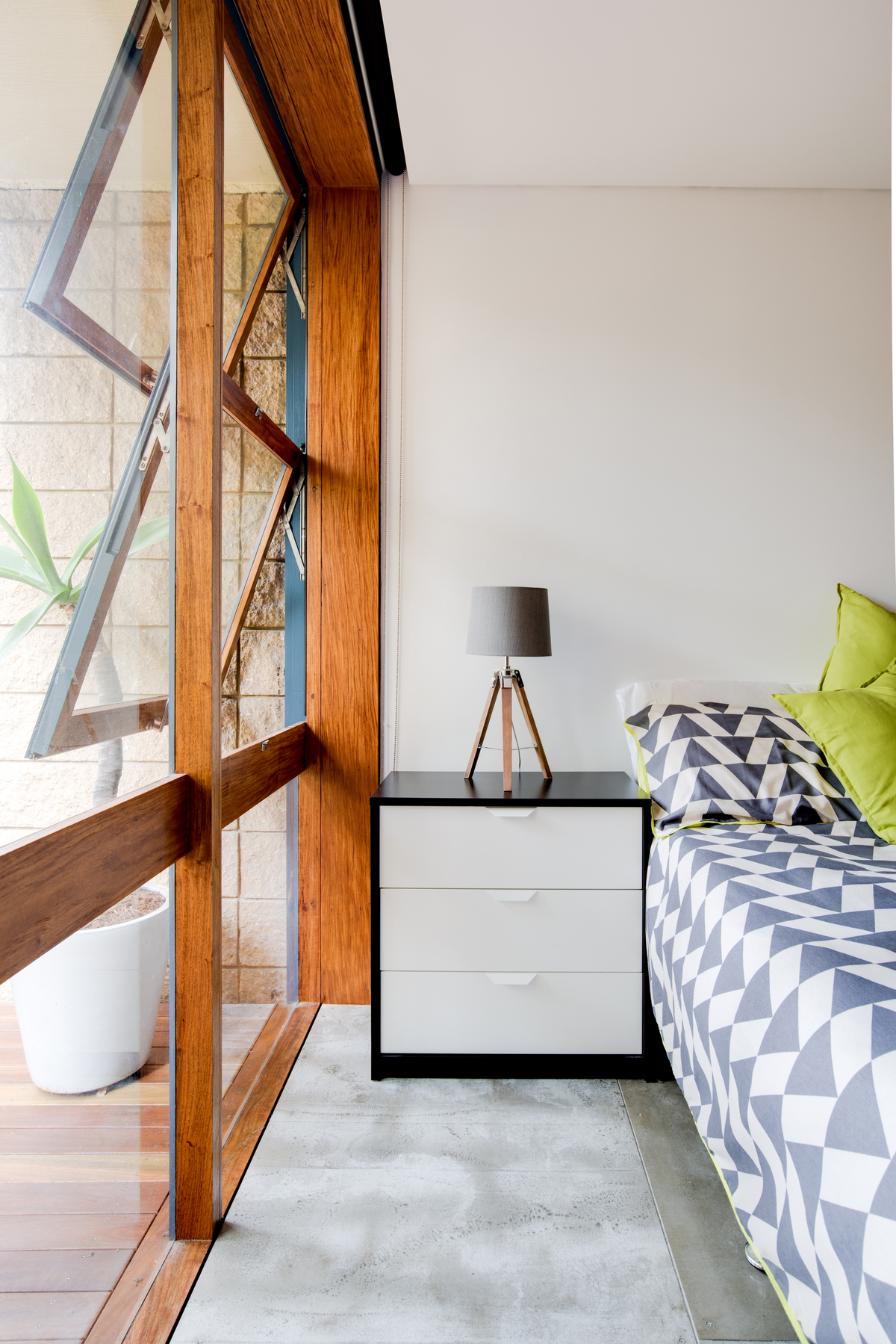 This idea continues throughout the apartment, setting the tone for a dramatic monochrome pallete of black, white and grey, softened and enlivened by elements of rich timber and pops of bold colour. “Instead of doing everything white, we had fun playing with the black and white theme, we then threw some vibrant colour into the mix for that pop of fun!” 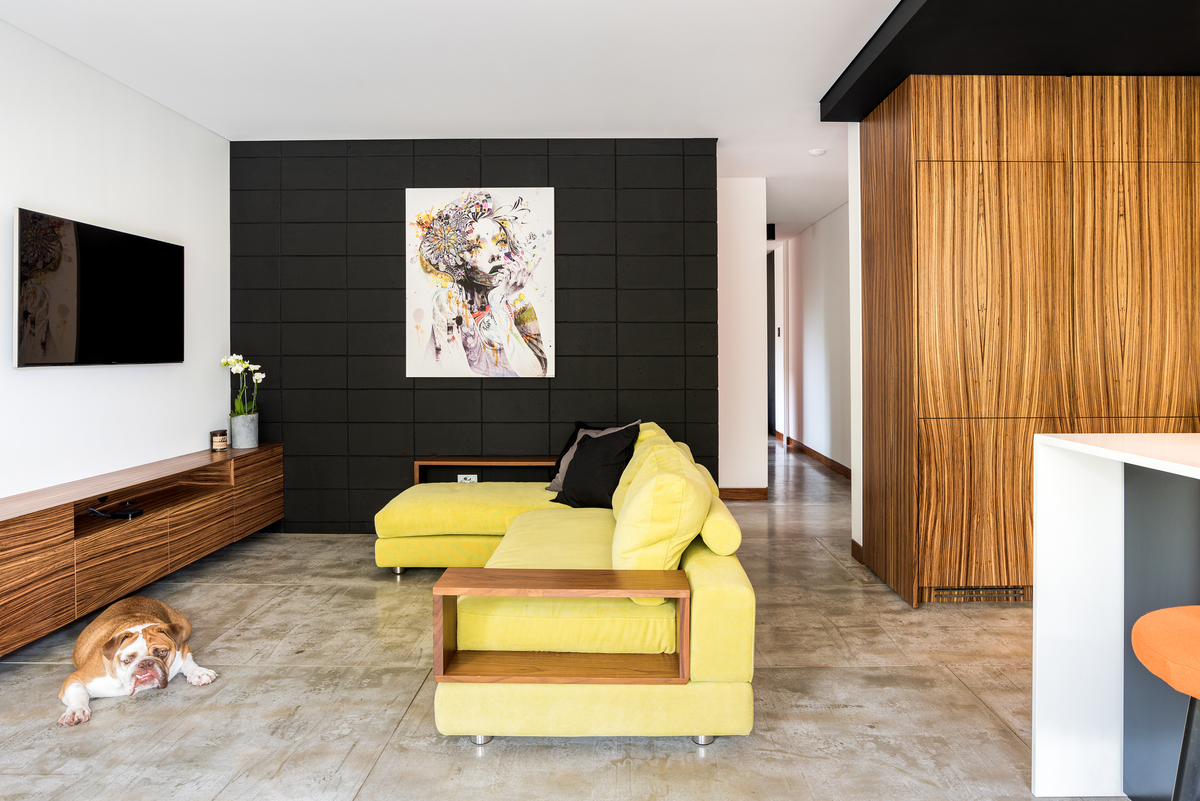 The clients loved the look and feel of exposed concrete floors, but early on in the renovation it became clear the concrete under the existing floating floor wasn’t fit for polishing. The architect came up with a solution that had the look of concrete, was similarly low-maintenence and could be installed over the exisitng surface. The solution? Raw fibre cement. The result looks great and as Ian notes, “its the first thing everyone comments on.” 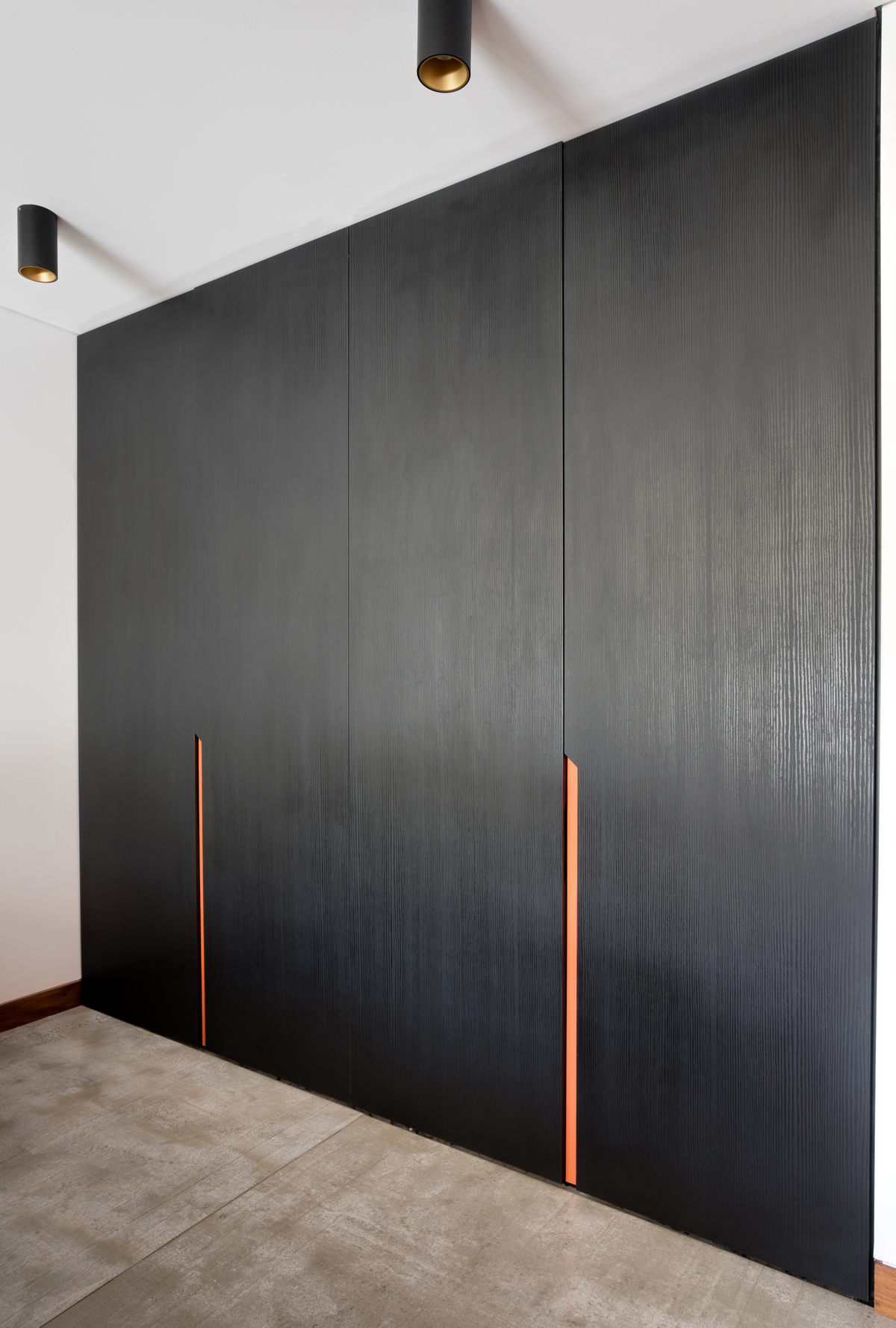 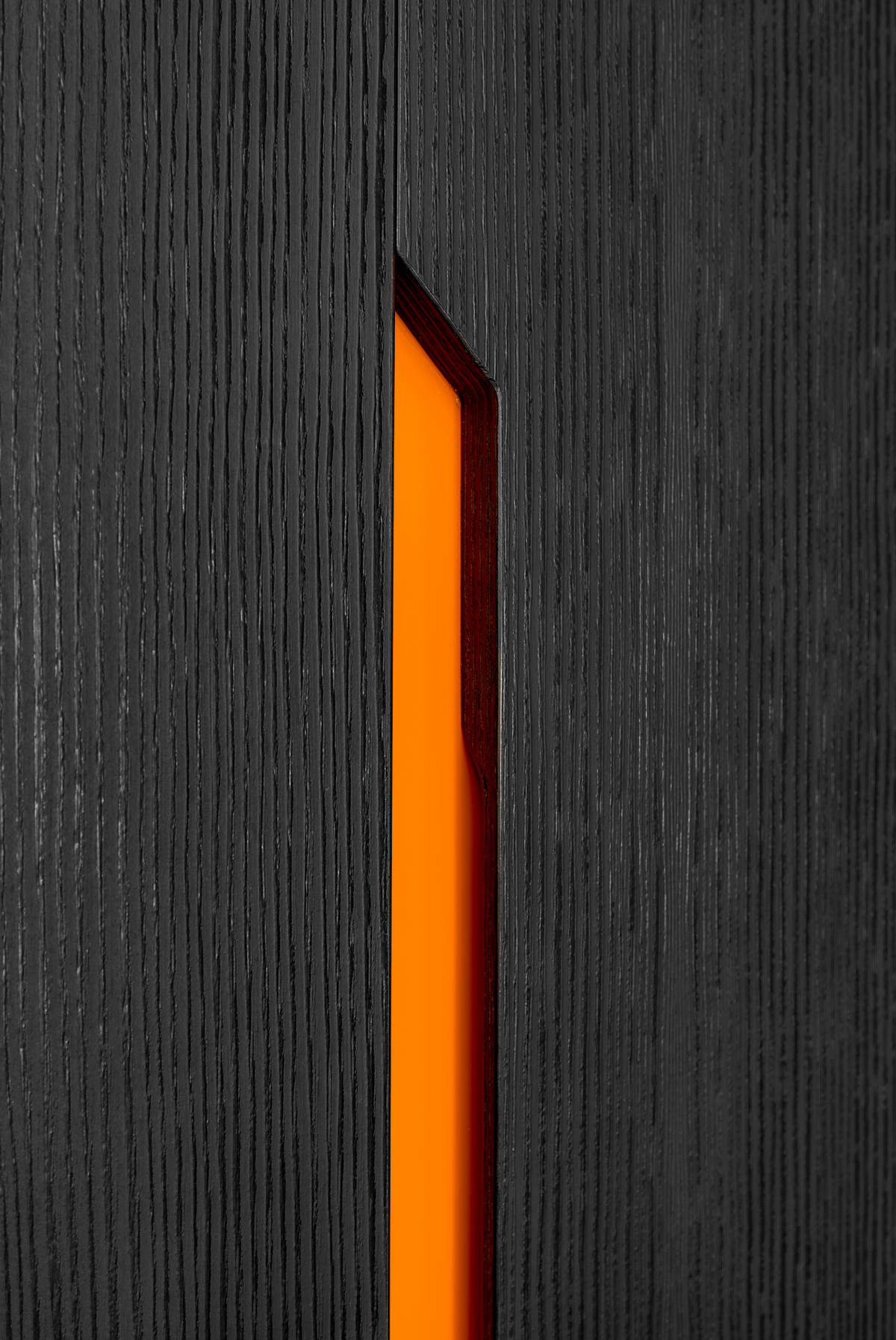 By opening up the kitchen to the living area and imporoving the connection to the deck, this apartment makes better use of space. The design feels breezy and spacious and makes the most of Sydney’s beautiful climate. Bold use of colours and materials creates a home full of personality that is exciting to spend time in. 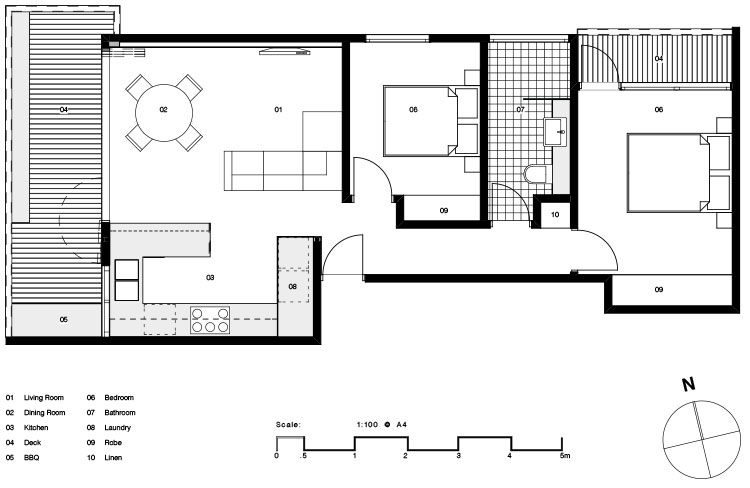 Add a bit of personality with bold colour choices, if you aren't brave enough to use it in the tiles - why not in the joinery?

If you want that concrete look but pouring a slab isn't possible, try a similar look alternative that looks just as good.

Doesn't this just add a bit of WOW! This is also a great way to separate rooms in a small space.